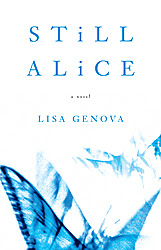 “My yesterdays are disappearing, and my tomorrows are uncertain, so what do I live for? I live for each day. I live in the moment. Some tomorrow soon, I'll forget that I stood before you and gave this speech. But just because I'll forget it some tomorrow doesn't mean that I didn't live every second of it today. I will forget today, but that doesn't mean that today didn't matter.”

I've been on a bit of a Lisa Genova kick since stumbling upon her through her most recent novel, "Every Note Played." My second experience with Genova was with "Inside the O'Briens" which has turned out to be my favorite novel of Genova's so far and having said that, I'm not entirely surprised that I didn't love this book as much as the first two I read. While this book still falls into the unique and heartwarming genre that Genova seems to have created all on her own, I just didn't connect to it like I did the others.

I do however, feel that this book brings about a controversial and important topic that many people aren't aware of and many who are aware of it avoid discussions due to the controversy and discomfort surrounding it. "Inside the O'Briens" slightly touches upon this topic but not to the extent that this book does; the topic of Death with Dignity.

I first heard of this concept several years ago when I learned about Brittany Maynard, a beautiful, otherwise healthy 29-year-old woman who was diagnosed with an excruciating and aggressive form of brain cancer that offered her less than 6 months to live. Maynard did some research and discovered out that Oregon is one of the states that has legalized Death with Dignity, allowing doctors to prescribe fatal doses of barbiturates to terminally ill patients who are able to choose when and how they die prior to experiencing the worst symptoms of their diseases and/or death at the discretion of the disease. Maynard immediately made arrangements to move to Oregon. Exactly one month before her 30th birthday, Brittany took the lethal dose of medication and died with dignity, on her own terms, peacefully and surrounded by her family.

Since reading about Brittany and her tremendous courage, I have been a strong advocate for the passage of Death with Dignity laws. When I think of her and also Alice, in the novel, describing the progressive symptoms of their diseases, crippling them on so many levels, I cannot imagine how anyone could not agree with the mercy that Death with Dignity offers to these people, not to mention the control that it gives them when so many other things that they would normally have control of in their lives have been stolen from them.

With this story, Genova not only sheds light on the realities of Alzheimer's Disease for the individual diagnosed but also for the friends and family of those who have been diagnosed but it raises various questions and awareness about Death with Dignity. For this and so much more, I find "Still Alice" to be an incredibly important book.
at June 07, 2018

“My yesterdays are disappearing, and my tomorrows are uncertain, so what do I live for? I live for each day. I live in the moment. Some tom...

Christyscmh
I've been known to quote famous movie lines at random, stare at the sky for hours, and complete my ATM transactions in Spanish although I only speak English. On my last birthday, I wished on my candles (29 of them, again) that the delicious Etsy community was a neighborhood where I could physically live. I am a pathological Googler and a coupon whore. I have a strong desire to become a Gilmore Girl and a strange tendency to sit in my car with a hair dryer pointing out of the window just to see how many people slow down. Since seeing the film Ghost, I have always wanted to dabble in pottery, of course the appeal could really be that I just want to play in clay with Patrick Swayze, God rest his beautiful soul. I struggle with the impulse to dance through a store instead of walk and out of sheer instinct I will break out into the Carlton dance whenever Tom Jones' "It's Not Unusual" comes across the airwaves, no matter where I am, so I hope it never becomes a church hymn, though I'm not above dancing with a pulpit. More simply put, I love to live.